Our Lady of the Rocks (Gospa od Škrpjela) is one of the two islets off the coast of Perast in the Bay of Kotor, Montenegro (the other being Sveti Đorđe Island). It is an artificial island created by bulwark of rocks and by sinking old and seized ships loaded with rocks. The Roman Catholic Church of Our Lady of the Rocks is the largest building on the islet; it has a museum attached. There is also a small gift shop close to the church and a navigation light at the western end of the islet. According to legend, the islet was made over the centuries by local seamen who kept an ancient oath after finding the icon depicting the Virgin Mary  on the rock in the sea on July 22, 1452. Upon returning from each successful voyage, they laid a rock in the Bay. Over time, the islet gradually emerged from the sea.  The custom of throwing rocks into the sea is alive even nowadays. Every year on the sunset of July 22, an event called fašinada in the local dialect, when local residents take their boats and throw rocks into the sea, widening the surface of the island, takes place. Church was upgraded in 1722.  The church contains 68 paintings by Tripo Kokolja, a famous 17th-century baroque artist from Perast. His most important painting, ten meters long, is The Death of the Virgin. There are also paintings by Italian artists, and an icon (circa 1452) of Our Lady of the Rocks, by Lovro Dobričević of Kotor. The church also houses a collection of silver votive tablets and a famous votive tapestry embroidered by Jacinta Kunić-Mijović from Perast. It took her 25 years to finish it while waiting for her darling to come from a long journey, and eventually, she became blind. She used golden and silver fibres but what makes this tapestry so famous is the fact that she also embroidered her own hair in it.

St George Island (or Sveti Djordje) is a natural formation. A Benedictine abbey, dating back to the 12th century, is on the island. Its appearance and purpose have changed in the meantime. The cemetery of the old citizens of Perast is also situated on the island. The legendary friar Frane and his unfulfilled love, Katica, the Romeo and Juliet of Boka Kotorska, are also buried there. 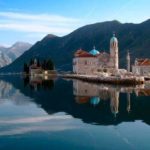 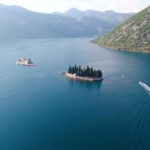 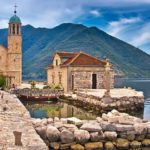 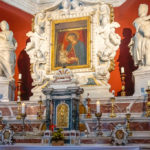