NATIONAL PARK LOVCEN is located in rocky region of Dinara Alps. Slopes of Mountain Lovcen steeply rise from coastal region of Budva and west part of Cetinje. Park is bordered by motorway Budva – Cetinje to the south and old Kotor road to the north. It covers the central and the highest part of the mountain Lovcen with total area of 6,220 hectares. “Black Mountain”, after which Montenegro got its name, rises to 1749 meters of altitude. Lovcen is full of the rich historical, cultural and architectural heritage protected by the national park. The area has numerous elements of national construction such as the old houses and village guvna. The cottages in katuns, summer settlements of cattle breeders are also typical for this part of Montenegro. Two thirds of the park is covered in forest. It is an important reserve for many of Montenegro's native bird species. It is home to around 200 species of bird including falcons and eagles. Nine different habitats at a very small space, result in large diversity of flora and fauna - there are 2000 plants in the Park. This abundance of life is a result of extreme altitudes and under influence of two climate zones: Mediterranean and Continental. Their combination at such small space is the cause of creation of such unique habitats. View from Lovćen from all sides leaves an unrepeatable and unforgettable visual impression. The biggest and the most important monument of Lovcen National Park is Mausoleum of Njegos.

MAUSOLEUM - It is the world’s tallest mausoleum -1660 meters above sea level. The sculptor tasked with designing the mausoleum, Ivan Mestrovic, sought to design the structure to honor the man and his main themes of “justice, freedom, and the dignity of Man and nations.” Upon submitting his design, Mestrovic refused compensation “except for a piece of cheese and the shoulder of a ram.” That was the honor shown in 1970.This monumental complex on the top of Jezerski Vrh was built in honor of the Montenegrin prince-bishop and poet Petar II Petrović Njegoš.

You can climb the 461 steps lining the tunnel that runs through the mountain. Visit the atrium and the crypt, and continue to the rotunda behind the Mausoleum; you will be awarded with a spectacular view. If you are lucky and the day is bright, you can see Boka Kotorska and even Italian coast, and at the same time, the village of Njeguši, situated on a green plateau surrounded by pine trees. On the opposite side appears Lake Skadar and far away you can even see the mountains in the northern part of Montenegro: Durmitor, Komovi and Prokletije. The chapel is the most impressive part of Njegoš mausoleum, with two caryatids at the entrance to the chapel – two marble caryatids represent two Montenegrin women symbolically keeping the kript and in front of it Njegos’s figure carved from granite, 28 tons in weight. The seated statue of Petar Il Petrović Njegoš holding an open book on his lap and an eagle above his head, carved in black marble, occupies the central part of the room. The chapel is nine meters high with the arch covered in mosaic with 200.000 gold-plated tiles. Sarcophagus reminds of traditional Montenegrin tomb, with the state emblem and a cross carved in stone, as symbols of Njegoš spiritual and secular authorities.

During his lifetime, Njegoš picked Mount Lovćen as the place where he wanted to be buried. It took a while for his wishes to be granted due to historical events after his death, but in 1925 his remains were moved to the mountain. 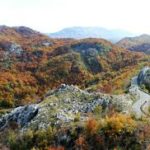 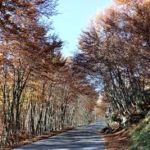 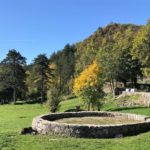 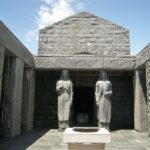