HISTORY AND HERITAGE TOUR OF MONTENEGRO

For the visitors who would like to get to know the tradition, culture and history of Montenegro, this tour goes through the places in which spirit and tradition of Montenegrin people are best kept.

A journey of discovery of rich and diverse Montenegrin heritage encompassing Roman, Venetian and Ottoman eras. Explore the history, culture and natural beauty of the remarkable coastline, including the delightful charm of Montenegro inland. A cultural trip to savour.

The diversity of the periods that came one after the other in this region have left their traces behind in a lot of parts of Montenegro. From the Paleolithic, through the Bronze Age, all the way to the Renaissance and Baroque, Montenegro has been enriched with the cultural heritage. The high concentration of the artistic and cultural wealth was recognized in the Kotor Bay, so the town of Kotor was included in the UNESCO list of cultural heritage.

The monasteries that are dispersed throughout Montenegro, from the Byzantine period until the modern times, reveal the spiritual wealth. Each one of them has its own unique way to enchant the visitors.

Our Montenegro history & heritage tour offers private, custom-tailored tours of Montenegro's rich heritage along the coast and in its inland, and it can be a day trip or multi-day tour throughout the country. Each tour is specially designed for each group or individual.

Our team, specialized in customizing private group tours, together with our experienced licensed tour guides, will look after all of your needs from the moment you contact us and help you plan a picture-perfect private tour just for you. We are here to make your experience a memorable one. We will work with you to customize your event either it’s a small or large group. We are also very flexible in order to satisfy all your needs. Don’t hesitate to inquire, as there has never been a request that we couldn’t assist with. 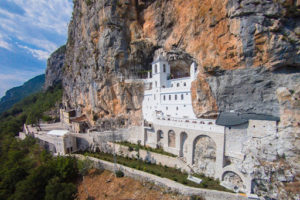 OSTROG MONASTERY (Niksic) attracts people from around the world with its exceptional spiritual power and the unique ambiance. Carved into the high rocks, it is very important as a spiritual and historic center of Montenegro. Herzegovina metropolitan Vasilije (Basil) founded the monastery in XVII century. 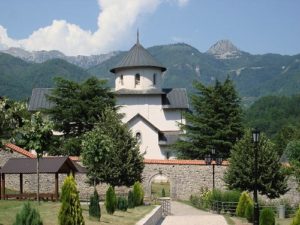 MORACA MONASTERY (Podgorica) was built in 1252 by Stefan Nemanja, son of king Vukasin, and grandson of Nemanja. The monastery complex is made of Synod church Uspenja Bogorodice (Falling into Sleep of Holy Mother of God), small church of Sveti Nikola (St. Nicolas), as well as of sleeping quarters building.  By the period of origin frescoes date from two periods. Ones were painted in XIII century and the others in two periods in XVI and in XVIII century. “Gavran hrani proroka Iliju” (Raven feeds prophet Ilija) made in XIII century is the oldest and the most famous fresco of the Moraca monastery.  Along with frescoes especially beautiful are icons which are placed next to the iconostasis, and which were made by the greatest masters of XVIII century. The icon of Sveti Sava (St. Sava), and the icon of Sveti Luka (St. Luke) are considered to be the most valuable pieces of icon drawing on Balkan Peninsula. 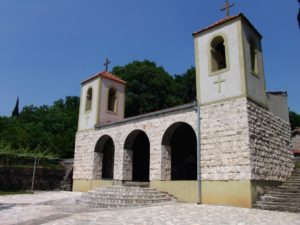 DAJBABE MONASTERY (Podgorica) was founded in 1897. Initially only the space of the cave was used for the church in order for it to be expanded later and look like a church with chapels. The only visible part of that church is outside the cave and that is a spacious entrance porch with two belfries. The protector, monk Simeon Popovic, adjusted the pictures to natural shape of the rocks while painting the interior of the monastery. 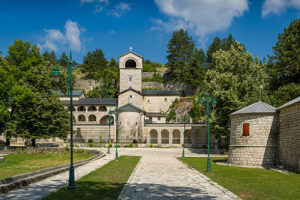 CETINJE MONASTERY is the legacy of Ivan Crnojevic, who was the ruler of the state of Zeta at the end of XV century. In the last 500 years this monastery was the seat of all Montenegrin bishops. Old monastery was built by Ivan Crnojevic in 1484 at the locality which is called “Cipur” (from the Greek kipurion which means a wonderful garden). The hand of Sveti Jovan Krstitelj (Saint Jovan the Baptizer), relics of Sveti Petar Cetinjski, Segment of Honorable Cross, as well as a part of the relics of Teodor Stratilan are preserved in the monastery with which the monastery itself is one of the richest treasuries of the Christian world. 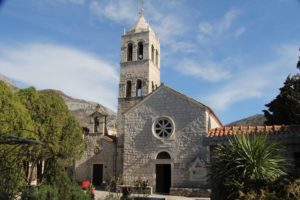 REZEVICI MONASTERY (near Budva)- The exact time when this monastery was built hasn’t been established, but a legend from a year 1226, (the time of Nemanjici), is related to its foundation. A small church of Uspenje Bogorodice (Falling into sleep of Holy Mother of God) is interesting because of the fresco painting, from which it can be assumed that protector or the donor of the church has been buried here. It is the legacy of Stefan Prvovjencani, first Serbian king. Bigger church dedicated to Sveta Trojica (Saint Trinity) was built in 13th century and has beside itself a belfry. Iconostasis in this church is a work of a painter Marko Gregovic from the end of 19th century. The church of Sv. Trojica is the legacy of emperor Dusan. The monastery is under the protection of UNESCO. 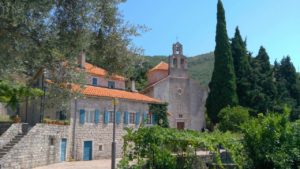 PRASKVICA MONASTERY (near Sv. Stefan) was founded in 1050, though the first reliable data about it date from 1307 when the Serbian king Milutin visited Kotor. This monastery got its name by the nearby spring whose water smells on peaches. (near Sv. Stefan) 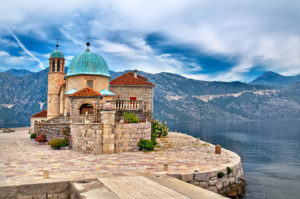 OUR LADY OF THE ROCKS or the church Gospa od Skrpjela is located at the same named island which is located in the bay of Boka Kotorska across the beautiful small and peaceful town Perast. This church was raised in 1630 on an artificial island, which was built by fishermen from Perast. According to a legend these fishermen after the shipwreck found on a sea rock an icon of Holy Mother of God with Christ and vowed that right on that spot where the icon was found they will build a church, which will be dedicated to this icon of the Holy Mother of God, protector of sailors and fishermen. 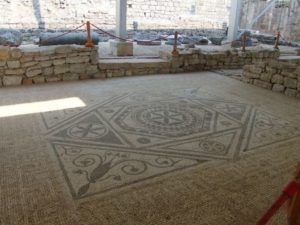 ROMAN MOSAICS - The most interesting archaeological finds in Risan are the remnants of a larger, representative Roman housing unit with the mosaics from the end of the 2nd and the beginning of the 3rd century. It is one of the most important archaeological sites in Montenegro, and as such is designated as a protected cultural monument.

MAUSOLEUM (Lovcen)- It is the world’s tallest mausoleum -1660 meters above sea level. The sculptor tasked with designing the mausoleum was Ivan Mestrovic.  It was built in 1970 and it sits at the top of the mountain’s second-highest peak, Jezerski Vrh (1657m). Take the 461 steps up to the entry where two granite giantesses guard the tomb of Montenegro’s greatest ruler and poet. Inside, under a golden mosaic canopy, a 28-tonne Petar II Petrović Njegoš rests in the wings of an eagle, carved from a single block of black granite. 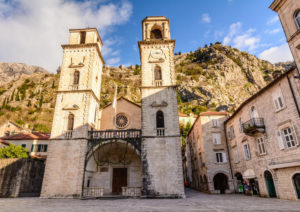 THE CATHEDRAL OF SAINT TRYPHON (Kotor) is one of two Roman Catholic cathedrals in Montenegro. The cathedral was built in 1166, in the place where at the beginning of IX century there used to be a smaller church which was dedicated to this same saint, and which was made in Roman style. This cathedral is known by the big treasury, which it has, because at the same time it is one of the oldest ones in the territory of Europe. Frescoes with which the cathedral has been painted with date from XIV century. 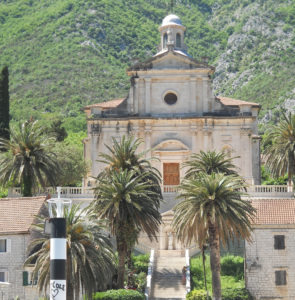 THE VIRGIN TEMPLE (Prcanj) is dedicated to the Birth of the Holy Virgin. With beautiful white staircase, its size would more suit places like Venice. This temple is the largest sacred object in Boka and is one of the largest in the Adriatic region. It was made of valuable white stone from Korcula in Baroque style and the beginning of its construction, the end of 18th century, coincides with the period in which Prčanj experienced a magnificent bloom. It was built according to the plans of Venetian architect Bernardin Macaruzzia. In the treasury of the church, there are numerous artworks of famous painters, and there is also the honourable flag "Merito Navale," which Ivo Vizin received from the Austrian emperor in 1859 as the first sailor who sailed the world under the flag of Austria. 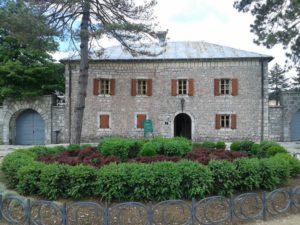 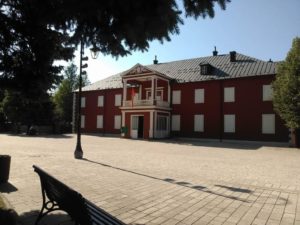 THE COURT OF KING NIKOLA I PETROVIC (Cetinje) known as the Palac, was built around 1863 with the first years of the reign of Prince Nikola. In the court, since 1926, the State Museum of Montenegro has been housed with an interior that kept its original appearance unchanged. 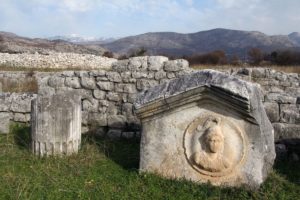 DUKLJA (Podgorica) is the most significant archaeological site in the territory of Montenegro, a grandiose cultural monument in this area. Roman town Doclea is the most significant ancient locality in Montenegro. It is 4 km from Podgorica, up the river Moraca. It was situated on the wide flat plateau between the rivers Zeta, Moraca and Siralija Creek. The founding of Doclea is related to the beginning of the 1st Century. The town was the most probably founded after the 9th year, and became a municipium during Flavi Dynasty, at the reign of Vespazian, when the largest numbers of municipiums were established in the area of the Roman province Dalmatia.

This tour can be booked with licensed tour guides speaking English, Spanish, German, French and Italian.

The tour can be modified (shortened or prolonged) to suit your personal preferences and adjusted according to your needs and wishes.