LIPA CAVE - Millions of years old, Lipa Cave is one of the country's largest caves and the first and only show cave in Montenegro open for organised visits with 2.5km of passages and halls filled with stalactites, stalagmites and freaky natural pillars. Its beauty was recognized by King Nikola I and Petar II Petrović-Njegoš, who played a very important role in the Montenegrin history. Lipa cave was known to exist prior to Njegoss’ time, and even then cave expeditions were possible. The first written record of the cave was published in 1839, which is deemed as the actual date of discovery, even though it is known that the cave had been discovered much earlier by the villagers of Lipa Dobrska. It was Henry Layard, an English archeologist, who visited the cave in 1839 and made the first written record of its wealth. In 1887 Russian geographer, Pavel Rovinski, wrote about the valuable ornaments and the cave’s lasting impression on the visitors as a testament to Lipa Cave. One of the explorers was the founder of modern speleology, Edouard-Alfred Martel.

Lipa cave has many tales which were passed down from one generation to another, especially among the villagers of Lipa Dobrska. Today, our guides tell them as passionately as they were told in the olden days. The locals remember the cave having been used as a source of drinking water by their ancestors who named some of the springs inside the cave, such as Iconostasis, Gemini, Intestines, Tongue, etc.

One must feel awed in the presence of such a huge and ancient space, shaped by eons of dripping water. When you see stalactites and stalagmites that have been created, drop by tiny drop, over centuries, it’s impossible not to be impressed by nature’s raw power and ability to create beauty. These hallways offer a variety of several interesting chambers, galleries and an abundance of cave ornaments. Underground streams, lakes and springs accentuate the cave’s natural beauty making it striking. Lipa Cave offers a charming diversity of karst features as well as a unique experience of the underground world of adventure to all of those who visit it. 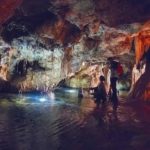 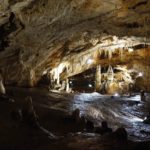 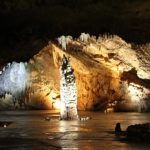